The Lord Mayor of Sheffield, Ald. Mrs Patience Sheard, looks at the memorial stone she unveiled yesterday on the village green at Dore.

Once upon a time – more precisely 829 – the rival claimants for the title of King of All England faced each other in battle array.

From the picturesque rural south came King Ecgbert of Wessex, moving his army in a swift northward push.

To repel the move King Eanred of Northumbria collected his hordes and marched to meet the advancing foe at the boundary of his kingdom – Lym Brook, the southernmost settlement and boundary with Mercia.

And it was on that day in 829 the two met across the battlefield of Dore village.

For such an historic moment the outcome was an anti-climax. Whether the two proved themselves great statesmen or whether Eanred realised he was on a hiding to nothing is not clear.

But Eanred decided discretion was the better part of building a united England and submitted to the forces of his southern rival and it was a Dore Ecgbert became the first overlord of England.

It was at Dore again yesterday that a local group of historians at last had a battlefield plaque unveiled to mark the events of history.

For a nation so steeped in history as the English, 829 to 1968 may seem a long time – 1,139 years to be precise, but the plaque-unveiling is the end of a great deal of detective work by Dore Village Society.

The inscription, placed on a 30cwt. stone slab, accompanies the drawing of a wyvern. The stone was bought by Sheffield City Council at a cost of £100.

The ceremony coincided with Dore’s well-dressing service and was the culmination of four years’ work led by members of the village society’s local-history group.

The Lord Mayor, herself an informed local historian, said to 400 spectators: “The stone at this village green has been made possible by the enterprise of the people who live here.

Now we have recorded for ever the most important single event in the development of the English-speaking race.”

Mrs Hazel Hoffman, wife of Mr. Sidney Hoffman – he is chairman of Dore Village Society – said the authenticity of the part played by Dore 829 was beyond reproach.

Research by the local history group, of which Mrs. Hoffman is a leading member, had proved 829 the year of agreement.

Chronicles compiled by monks said the year was not known but was between 825 and 829. The group found the agreement was signed during the year of a total eclipse of the sun and they traced the year from that information.

The inscription for posterity reads: “King Ecgbert of Wessex led his army to Dore in the year AD 829 against King Eanred of Northumbria, by whose submission King Ecgbert became first overlord of England.” 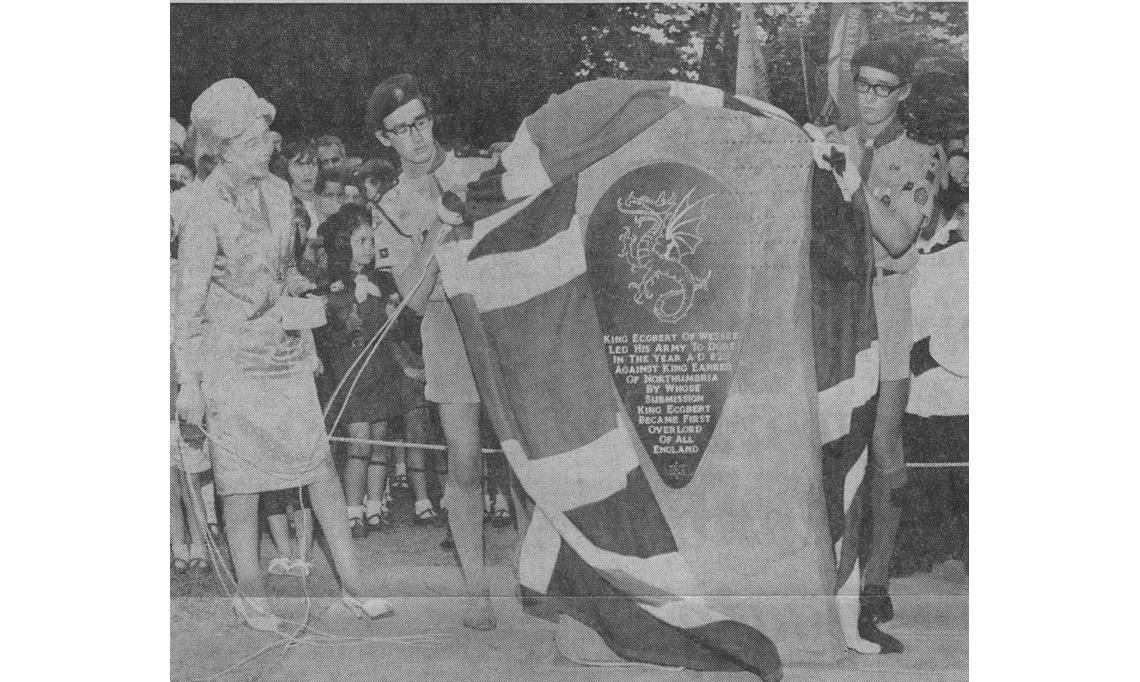